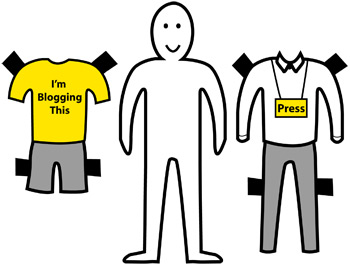 The economics supporting journalism and media seems to be wreaking havoc on previous definitions of what constitutes journalists and bloggers. At the same time, many print journalists are beginning to leverage the tools of the web with greater authority, and independent experts – or bloggers – are finding respect, audience, and financial rewards in the process. Let’s put this in context.

At the Seattle Times, Editor-at-Large Mike Fancher explains why the paper can no longer afford to pay for a role like that, and that he will be retiring from this position, but starting a blog:

“I believe the future of journalism hinges on the ability of the press to find the right connection, and it won’t come naturally for many journalists in our nation.”

A free weekly paper, the Chicago Reader, finds itself sacrificing top journalists due to economic realities:

“…four positions were sacrificed Thursday in what Editor Alison True said in a memo to staff could be attributed to “the financial pressures of our industry [that] continue unabated.”

“Lost in the Reader purge were staff writers… identified as having “produced some of our most important and exciting” pieces.”

“But True, in an interview, said that, given a mandate from her bosses in August to cut editorial costs, it became more difficult to afford their long-term investigative work. She indicated she would welcome freelance pieces from any of them.”

But for some writers, they find themselves being courted from traditional print brands, to successful online media outlets:

“ESPN and Yahoo Sports are on a furious hiring binge, offering reporters and columnists more than they ever imagined they could make in journalism. And ESPN, in particular, has gone after the biggest stars at newspapers and magazines, signing them for double and triple what they were earning — $150,000 to $350,000 a year for several writers, and far more for a select handful.”

“Some print publications, notably Sports Illustrated, have selectively tried to keep up with the lucrative ESPN and Yahoo offers, to retain some of their writers or attract new ones. But for the most part, newspapers, though they are being forced to raise some salaries, cannot keep up. Several say they are suffering through the worst talent drain their editors can recall.”

“My counteroffer usually comes down to asking them what kind of cake they want at their goodbye party,” said Emilio Garcia-Ruiz, assistant managing editor for sports at The Washington Post, which has lost three writers to ESPN in the last year and a half. “The numbers they throw around are out of reach.”

The financial aspect of journalism does not speak to all the changes that are occurring. Their are key distinctions in how tools available to journalists are being leveraged:

“Once a journalist’s story has been edited and published, he or she is on to the next thing. By the end of the day, the story is lining a cat’s litter-box somewhere. It’s over, and the journalist is hitting the phones, getting the next scoop. There’s no equity in revisiting old pieces, especially given the “no sooner does the ink dry than it revolts me” syndrome – something coined by Jesse Eisinger, paraphrasing Samuel Beckett.”

“A blog, by contrast, is nothing without reactions – from commenters, from other blogs, even, occasionally, from the mainstream media. Professional journalists simply don’t view their own work in the light of how it’s received by others in the way that bloggers do. They therefore have little interest in using web technology to artificially extend the natural life of any given story.”

And in a shift from the common view of bloggers being irresponsible when compared to traditional journalists, here are two examples of flipping that paradigm:

Even government policy is evolving to meet the needs of changing definitions and roles in journalism:

“[The Freedom of Information Act] has always exempted journalists from paying fees to access government records (other citizens and companies are charged for search time and duplication of documents), but the rise of the Internet has made it more difficult for government agencies to decide if someone is a legitimate “journalist” or not.”

“The OPEN Government Act sets up what seems to be quite a reasonable standard for making these decisions: prior publication history. Writers need have no official affiliation; if they have a history of publishing pieces, on the Internet or elsewhere, they should be considered for a fee waiver. Even those without such a publication history may be eligible for a waiver if they offer a compelling explanation of how they will distribute the material in question to a broad audience.”