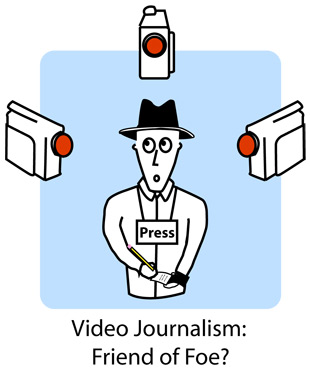 Shel Israel explains why online video can be so much more compelling than the printed word. He tells a story of when he was a reporter in the 60’s, and TV news began to be real competition for him:

“While the best I could do was tell you what it was like to have been there, the TV guy could actually show you. ”

Andy Dickinson predicts that newspaper video will die, if not properly leveraged.

“The winners will be the ones who make it work because they have a strategy that fits their organisation and more importantly, their audience. The increase in organisations who do it badly will result in the print industry continuing to cast video as the problem – a flash, unnecessary diversion from proper journalism – rather than admitting they just can’t do it.”

But many newspapers, large and small, are taking online video seriously. Vivian Schiller, the General Manager of NYTimes.com explains why reporters are embracing video:

“Video is a way to get at angles of the story that you can’t possibly get to in print.”

The Times is not just training their current staff of journalists or hiring new ones, they are partnering with others to create video content. They recently added videos to their site that were produced by an outside company, Beet.tv, and that are “reported by non-professional citizen journalists.”

Media outlets and journalists are still experimenting with how to best produce and leverage online video. Here are a few newspaper profiles to give you a taste:

Mindy McAdams shares tips on what works and what doesn’t work in online video. Two recent posts from her:

In 2007, online video really hit the mainstream, and many have dreams of creating a viral video that will become an overnight sensation on the web. One online marketer, Dan Greenberg, explains how these viral hits are not always what they seem – sometimes they are just clever marketing campaigns from an agency. Here is an outline of strategies he shares:

While journalists should not necessarily follow these tactics, it does illustrate that online success is not just about creating a good story and hoping people find it. Understanding tagging, distribution, titling, and how web services work are essential to finding massive audiences on the web.