Again and again, we hear about “community marketing” or some variation of that term – how businesses are leveraging social media and the web to engage their markets at a deeper level with the strict goal of growing their own business – growing revenue and profits. Don’t get me wrong, I understand that there are many positive side effects to businesses being involved within communities, but it should be noted that without the financial component of profit – their interest in “community” wanes quickly.

Today I want to talk about what community involvement really is, and how community is about kindness, not recognition. How one’s efforts are often silent, built up slowly over time, and their effects felt years later, perhaps long after the person has moved on.

Oddly, this is a story about a tree. (please bear with me here…)

On Wednesday my wife, 3 week old son, and I took a drive around some scenic towns. We went through Basking Ridge, and noticed a sign on a corner that read something like: “On December 12, 1776, General Charles Lee was arrested on this corner at White’s Tavern by the British army.”

That’s one thing I love about New Jersey, it’s peppered with history in the oddest of places.

We continued on our journey, and into the more rural horse country areas, including New Vernon. As I drove, my wife noticed this HUGE tree in a field, and that the tree had a plaque on it. Since we had nothing better to do, I turned the car around, pulled over on the side of the road, and wandered onto someone’s property to see what the plaque said. My wife and I were guessing what it would say – something like “Under this tree, General George Washington setup camp prior to fighting British troops,” or something like that. The tree looked like it was hundreds of years old.

So, I approached it, snapping photos: 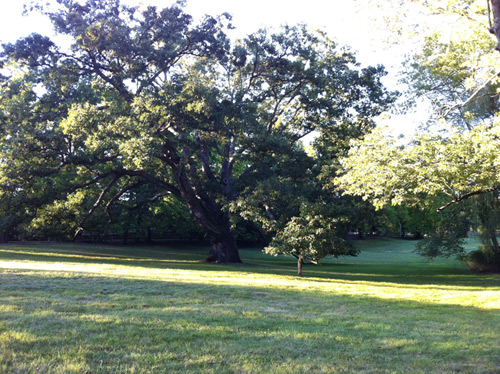 The scale of it was surprising. 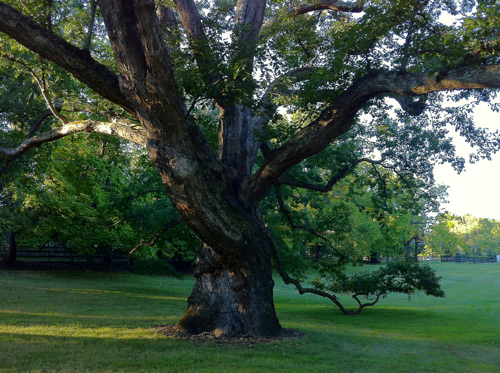 This could be the biggest tree I have ever seen, and perhaps the oldest. 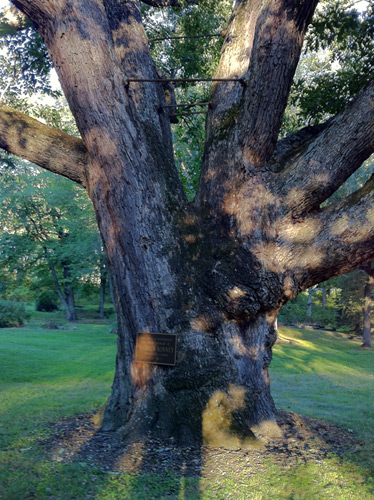 Interesting to see all of the extra supports that people added to it to ensure it wouldn’t fracture under its own weight. 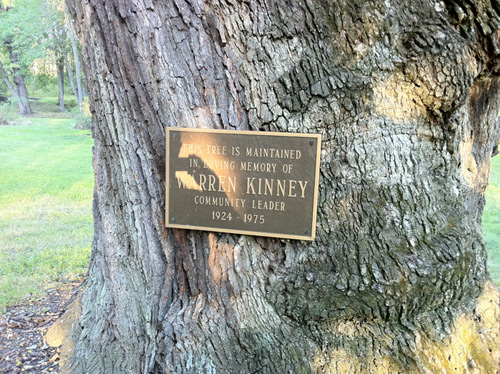 Finally, I get to read the plaque: “This tree is maintained in loving memory of Warren Kinney community leader 1924-1975.”

At first, it was a bit of a letdown – that this wasn’t some major historic site. But as I thought about who Warren Kinney was, and how for the past 35 years, this tree has come to represent him after his death, it spoke to me about the history that we don’t see. The history of how our lives affect each other, and how our contributions to communities are still felt long after we are around to experience recognition. That the effects of our lives may not be emblazoned on buildings or statues, but they are woven into the fabric of the community around us. If we are lucky, we get a plaque on a tree.

What did Warren Kinney do to warrant a plaque. I have no idea. But I imagine he didn’t demand one. He had died before it was placed there for him. There was no personal gain in it, and yet somehow, he surely earned it. The plaque is meant to be a physical representation of his effect on the community, and how it extends well beyond his life.

Contrast this to online community marketing – how businesses are “targeting” communities, and “influencers” within them. But they are demanding attention, demanding a return on their “investment” by putting resources into the community. They will be measuring ROI in the very short term in order to determine whether their investment in time and money has paid off. This is not how one serves a community. One’s standing in the community is not based on the promise of what you will do, but on reflection of what you have done.

Successful community involvement is measured in years, not fiscal quarters. As the social web continues to evolve, I hope it helps bring our communities together. That it won’t turn into something to be leveraged for particular business interests, more closely focused on increasing quarterly revenue for the few, not the benefit of the whole.

An interesting footnote to the Warren Kinney story. From The New York Times in 1986:

“Since 1975, the New Vernon, N.J., estate of Warren Kinney, a gentleman farmer, has stood idle. Now, however, the 102-acre property is being prepared for the construction of 22 homes that will cost $1.2 million to $1.7 million.”

I can’t help but find connections to my blog post from last week, where developers turned the famous MGM movie back lot sets into condos.