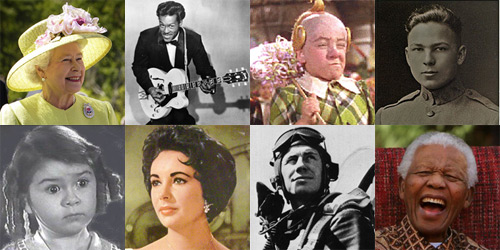 Recently, I have found myself thinking about the luminaries from the early 20th century who are still with us.

It’s been fascinating thinking of those still with us; those who shaped the 20th century, who created, who endured, who sacrificed, who inspired, and who leave us with a smile on our faces. In considering their lives, and those whose time has already passed, it puts a fire in my heart that says:

This is our time.

Our time, not to be a cog in the machine, but to innovate:

David Carr recently pointed out the reasons why Oprah Winfrey’s influence will remain for decades with real meaning while her counterparts will be left with a mixed legacy of squandered potential. And I think there is a lesson in here for so many in media and publishing – whose race to win today’s battle and attain personal glory will soon be overshadowed by tomorrow’s flavor of the week. We need to look beyond these brief moments.

There is an opportunity – today – to improve education, publishing, media, communication, and assist people in their creative endeavors. And I believe that the digital landscape is empowering these areas in new ways, making them more accessible, even to those who have the fewest resources.

Yes, things we have known and love are changing. No, I do not know the future of printed newspapers & magazines, or the role of journalists, or the revenue streams that will support publishing companies. But if we focus only on preserving what already exists, we miss the opportunity to shape the future. The core of our beliefs lies in the same things: human expression, finding truth and sharing it, and empowering people to become smarter and more skilled.

Digital media is not the enemy of these things, and today we are creating the world that future generations will live in.

Imagine if you were present at the advent of the printing press, when sound came to film, or when the first radio broadcast went into homes, or the first television. You have witnessed and been a part of a shift in our culture & media just as large as any of these. Industries are being shaped by the changed in digital media at this very moment, and their affects will last for generations. The only question is this:

What is your role?

Will you drag your feet, bemoaning changes that are inconvenient to what you already know? Will you focus only on short term gain? Will you wait for others to make the hard decisions? Will you stand up or sit down? Will you be middling or will you lead the charge.

Will you be Willy Loman or Willy Wonka?

These are decisions that don’t come in a dramatic movie-like fashion, but in small ways, in small moments, every day. There is no immediate reward for those who seek the more difficult path to shape the future, rather than walk the path that others have forged. Yes, it is safer to move ahead once the market has been created, best practices established and rewards guaranteed – but does that create the legacy you are looking for?

Every day, I wake up excited to get to work, inspired by the experience and brilliance of those around me. And every day, I wonder what tomorrow will hold. As much as I appreciate the past, appreciate the sacrifice and bravery of others, I am reminded, that today is our time to create the future. In many ways we have a choice to either push forward or hold back, realizing that there is no manual and no assurances. And that sometimes, we need to walk to that cliff and jump into the unknown – together.