Here at Reed Business Information, many brands and editors have drank the Twitter Kool-Aid. Now we have to figure out something important:

Is this worth our time and effort?

Journalists, marketers and other folks at RBI are incredibly busy people. If they are using Twitter, what is the return on investment for their time and effort?

I decided to take a peak behind the curtains at one brand to see what all their Twittering has brought them. Let’s get this started:

That’s a lot of updates, right?! So, at the most basic level, how much exposure did this bring to School Library Journal. It’s a difficult metric to pinpoint for a variety of reasons* (see more about metrics below), but a conservative estimate is: 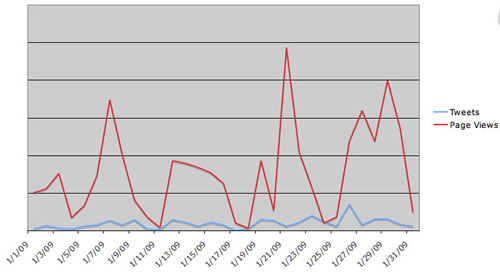 Some of these spikes align to big news items: coverage of the inauguration, a huge book awards event, and the tragic deaths of two librarians.

The anatomy of SLJ’s Tweets: 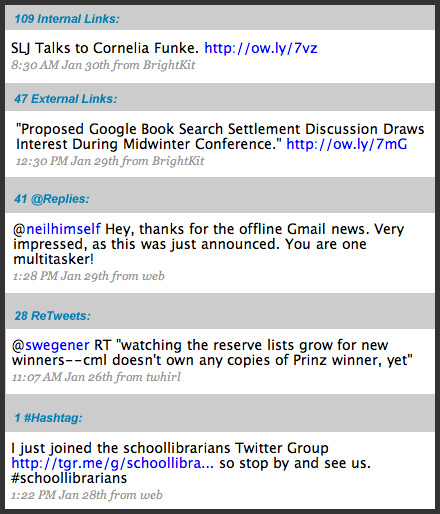 Now, are these metrics good? Sure, they’re good. Are they great? Who knows, but we are seeing Twitter take off VERY quickly. This could be just the start of something huge. But wait, aren’t there other benefits of Twitter? Sure: 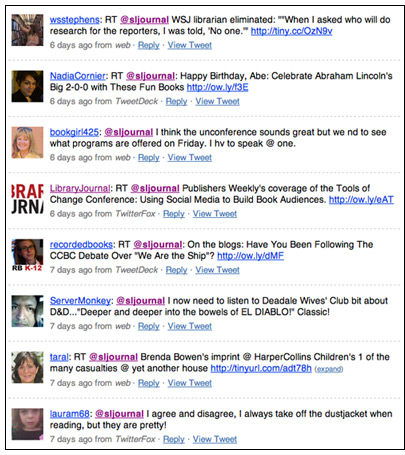 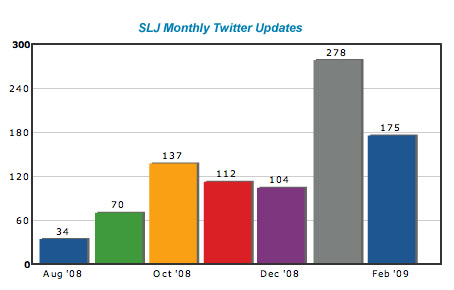 Overall, I think there is a strong case here for proving the value of Twitter. What is important to notice here is how rich School Library Journal’s Twitter updates are. They are full of links, replies to members of their community, and promoting of the best content from other Twitterers they follow.

What’s more, this is a network that is full of potential. Likely, it is just getting started, so I hope to see these metrics improve in the coming months.

Here are a few ideas to help expand your Twitter network: 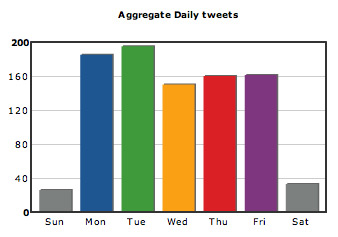 How to manage Twitter with your competing responsibilities.
Likely, you have a ton of work on your plate. If you are an editor, you are responsible for researching articles, writing articles, creating blog entries, tagging content, uploading images, learning video, finding links, and a hundred other things in a given day.

When approaching Twitter, the key question is how much effort do we put towards leveraging it, and what are the best tactics to do so. How can you get started on Twitter without it having an adverse affect on your other tasks? Some ideas: