Once you start shooting video, the biggest challenge is figuring out what to do once you have the footage in your camera. Unless you can get exactly what you want in a given shot, you’re going to have to edit it before it goes online. 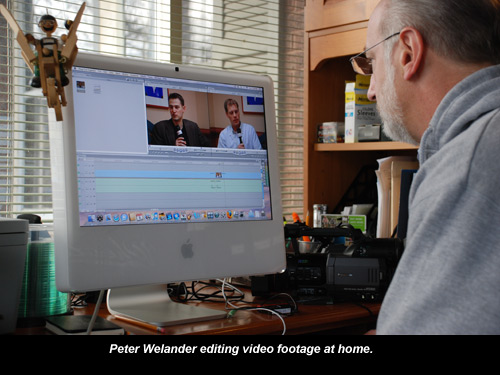 Twenty plus years ago, I had an assignment to produce a simple instructional video for a company I worked for. We hired a professional videographer, who worked out of a small storefront office. Mostly he did weddings and other odd jobs, but he was cheap. His editing in those days consisted of a complex set of multiple VCRs that transferred images from the original to a copy. Suffice it to say the process was tedious and editing that way lost some picture quality.

Ten years later or so, we did another and shot it ourselves. I went to a different editor who had an early digital setup. He digitized the VHS tape we shot and edited on a computer. It was much better, but the equipment was hugely expensive.

Now, the amount of equipment available to edit video boggles the mind. I started searching for what was available and the choices are overwhelming. Suffice it to say, there is every conceivable degree of sophistication and price range. One place that seems to begin the sorting task is Top-10 Reviews.

I don’t feel qualified to make any kind of recommendation given the huge variety of what is available. All I can do is relate my personal experience. I took up the task of trying to learn basic editing so I could bridge that chasm between the camera and online posting. I had no idea where to start, but one obvious choice presented itself. In our pre-press department, we do some pretty sophisticated editing with a platform called Final Cut. This is a very sophisticated system and runs on a Mac. I have a Mac at home that’s a couple years old, so I decided to investigate the possibility. Final Cut Pro is very expensive, but there is a home version called Final Cut Express. This is available for about $100 and certainly has everything I need.

So, last summer I started to work on this new skill. Right out of the box I discovered my computer didn’t have enough RAM. It won’t operate with less than 1 gig. (I had a mere 500 meg. Sheesh, I used to think that was a lot.) So I added another 2 gig, and now it runs very nicely. I got a good book and started working through the tutorials. Moving step by step, I realized that it was complicated but not impossible. Since I am editing on the same platform as we use here, I can bring in partially finished projects and transfer them to the big system for completion. This has saved a huge amount of time in our pre-press department having to upload footage from the camera, sorting shots, etc. I can do that myself, lay out a basic timeline, and bring it here for polishing.

Here’s a link to a video that we are now hosting that illustrates my new found editing skills. It’s a little crude, but it illustrates some basic shot matching approaches that give the impression that you have multiple cameras. At this level of ability I can now handle anything that I’m likely to encounter doing something for Control Engineering. The video is less than seven minutes, and it’s kind of fun in its own way.

Having said all that, if you want to start editing video at your desk, you need to consult with your IT department. See if they have an opinion as to which software platforms they support. Some computers in the office may not be up to the task. Your PC that’s three or four years old probably won’t cut it. To start, one of the hardest things is simply moving video footage from camera to computer, referred to as capture. Some small cameras that record to a card (as opposed to tape) and have a USB connection will probably work as-is. Others that need a fire-wire or some other AV cable probably won’t. (For some computers you’ll need to add a card.) IT folks find video editing scary. Video files are very large, need lots of RAM, and demands on the processor can be heavy. Long story short, don’t be surprised if your request to add editing software to your office computer is received without much enthusiasm.

Your practical choice may be that you have to do it at home, at least until some of these logistical issues can be sorted out on a larger scale. You don’t have to work in Final Cut to bring your projects to pre-press for some additional polishing. The best way to do it is using an uncompressed file format, such as .avi, .mov (Quicktime), or even .wmv (Windows Media). Compressed .flv (Flash Video) files don’t work as well.

As more people want to acquire the skill, hopefully we, as a company, can find ways to accommodate it. Online video is growing in popularity, and if we as properties don’t develop our skills, our advertisers and even readers could leave us behind.