Here’s the Tascam US122L as you might set it up with two mics. In most situations you’d probably use a laptop, but any computer will do. Note that the interface is as large as a professional digital recorder and needs the same equipment for all practical purposes. There are other interfaces that are somewhat smaller, but they’re still bulky.

Going back to the beginnings of podcasting, many early practitioners expressed their opinions by talking to their Macs, recording directly using GarageBand. That’s a crude approach and the sound quality reflects it. But there are much more sophisticated techniques available now. Bear in mind though that a desktop or laptop is not, by nature, a recorder. It can have that function, certainly, but there are constraints.

The interface is bigger than a relatively large digital recorder. That might tend to keep it office bound. 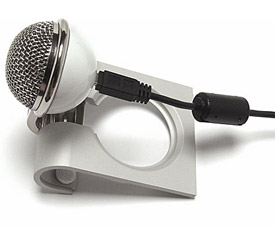 First, you really need some type of external microphone. The built-in one just won’t cut it. Fortunately, there is a variety of products aimed directly at computer recording. Microphones that plug in via the USB port have grown in popularity. (Inexpensive ones like you can buy at Radio Shack aren’t much better than the one in the computer, so get something worthwhile.) The Blue Snowflake is designed just for podcasting on the road with an integral stand and costs only $69. If you want something more sophisticated but less portable, the SE-Electronics USB1000A at $199 or Rode Podcaster at $229 cover the high end of the range.

Read an article from PC World on the topic of USB mics.

On the other hand, a USB mic won’t help you if you have to record off the phone or you need some other line-level input.

If you want something more sophisticated that adds the possibility of using more than one mic, or other types of inputs, there are interfaces that allow you to feed your signal into the USB port from a device that adds some capabilities of a mixing console. These typically have multiple mic inputs and function as a mixer and headphone driver. Some designs are VERY sophisticated and aimed at producing the next indie rock sensation in your basement. For podcasting, you can stay at the low end of the spectrum. You’ll still need to use “professional” mics, but the basic units are really not all that complicated. One example is the Tascam US122L at $129. We bought one of these and it works quite well, allowing you to use two mics and line inputs with some simple mixing functions. The downside is that the software is weird and tends to disappear. The glitch may have been fixed, but be aware of that caveat. You will likely have to load the driver from time to time.

As an additional benefit, you can connect your stereo system to one of these interfaces and transfer your favorite vinyl to CD or your iPod.

Second, you need a software program that supports recording. Audacity is probably the most common choice since it works and is free. (That may be the subject of a future discussion.) GarageBand is popular for Macs, and I’ve used it for dozens of projects. There are oodles of other choices, most of which are aimed at music recording projects, but basically any of them work for speech recording and basic podcast mixing, provided you aren’t overwhelmed by the other functions.

As mentioned before, computers aren’t recorders. You may have to do some optimizing to get the best results. For our relatively simple purposes, what you have will likely be fine, but here are some recommendations for things you can do to make the process easier.

The best advice is experiment. Make sure you know how everything works before you try it with something you need.