Last week, we discussed some technical considerations for recording high-quality podcasts. Once you’ve set down that path and are getting ready to invest in a digital recorder, how can you tell if a specific model will help your efforts or be a waste of money? 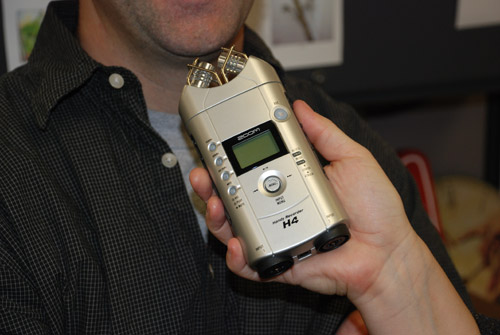 Jeff Weinstein at Hotels Magazine likes his Zoom H4. His advice is to get close to your subject for best sound. 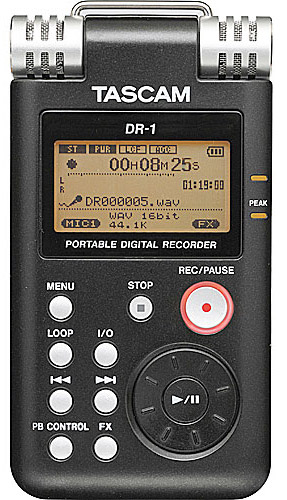 First, my own experience: Our publisher was strongly encouraging us to start working on podcasts. My latest audio training was working on a 10 watt college radio station in 1973-74 when “digital” meant something to do with your fingers. I had seen small recorders, but had no clue what they were about. So, in October 2006, I went to my local Guitar Center store, and plunked down about $300 for a Sony MZ-M10 minidisk recorder (now discontinued). It was a totally uninformed purchase and I quickly learned the features that were in my favor, and those that were not: 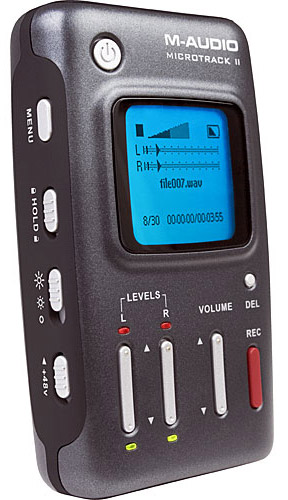 Dollar for dollar, I could have done much worse. Once I figured out its operational quirks, that little recorder did very well. I used it for at least 30 podcasts and dozens of interview recordings. It has now been retired (although my boss likes to use its mic) in favor of more sophisticated devices, but I miss its tiny size and portability. Since the cost of CF and SD memory cards has come down drastically, the attractiveness of minidisks has faded, and the format is likely headed for extinction before too long.

There are many choices of digital recorders with price points at $200, $300, and on up. While I can’t claim experience with very many of them, I can suggest features to consider and things that might make one more attractive than another. The intent of this isn’t to recommend any specific type or model, but to give you points of analysis that can make your selection easier.

Let’s start by examining a few speech or voice recorders from Sony:

Sony ICD-UX70, $99
This unit has 1 gig storage (non-removable) which is quite a bit, but the specs do not indicate the recording format. The shortest capacity (highest quality, we assume) is about 12 hours, which suggests a medium-sized MP3. Sound quality will likely be disappointing under all but the best circumstances.

Sony ICD-SX68DR9, $199
This bigger brother unit actually has less storage capacity (512 MB). Maximum recording times suggest the best file quality is probably 128 kbps stereo, so that will make for disappointing sound. There are better choices for that kind of money. 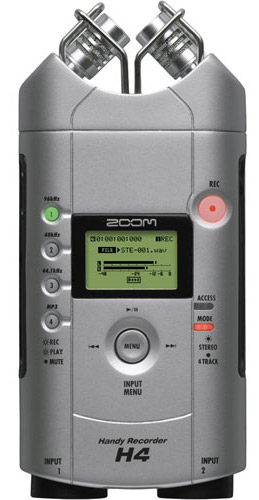 Once you’re up to $200, you might as well begin looking at “music” recorders. These are configured for recording your favorite band, guitar player or whatever. That means they have reasonably good built-in mics and should have no trouble with normal speech. Most lack any directionality, so they will pick up ambient noise just as efficiently as they do speech. They are all stereo and do not include mono options that I can tell. This isn’t a problem beyond the fact that it creates a larger file size that gets mixed down in editing. All these units require menu-driven controls due to the sheer size of buttons. That can get complicated and it’s hard to compare units directly. Suffice it to say all designs suffer this to some extent.

One of the most interesting entry-level machines is the Zoom H2 at $200. The built-in microphone configuration looks like it allows for an adjustable pick-up pattern, but it’s hard to tell how that will help with a typical podcast recording situations. As far as other features go, it has the standard set of recording format options, including those we need most. All connections are via standard stereo-mini plugs (mic in, line in, headphones) and USB. This unit can also function as a USB mic, feeding its signal directly to your computer. Records onto removable SD card. This looks like an excellent choice, even when being compared with more expensive units.

There is another group clustered around the $300 price point. All have built-in mics and the necessary recording format capabilities. They have more differences than you might expect which make for an odd assortment of upsides and problems. One peculiar element that I can’t quite figure out is the assortment of external mic sockets. Most external mics have either a stereo mini or XLR connection. Those with ¼ inch plugs are far less common.

Zoom H4
An interesting hybrid configuration: This is the only one in this class that I’ve seen with “professional” XLR mic inputs. That’s great if you want to use a wider variety of mics, but makes more mundane patching applications (like a phone interface) more challenging but not impossible. Can also act as a USB mic and feed directly to a computer. Uses SD cards.

Yamaha Pocketrak 2G
This seems to be billed as a high-end voice recorder with high-quality formats. But, it has only 2 gig of non-removable memory. That still means 3 hours without transferring or erasing but you can’t change cards. Stereo mini inputs/outputs. Smallest form factor.

Tascam DR-1
This has peculiar external mic inputs, including both ¼” and mini sockets. I’m not exactly sure what that’s about, but still ultimately useful. It has some interesting overdubbing capabilities, so this is definitely aimed at musicians. Uses SD cards.

M-Audio MicroTrack II
Another odd configuration, the only one in this class that has no built-in mic. It has ¼” and mini external mic inputs and comes with a separate stereo mic. The mic can be plugged directly to the unit, or via an extension cord. This can actually be a very handy thing and can make it easier to get closer to your subject. Outputs via headphones and RCA connectors. This design looks like they’re trying to make a unit that has more “professional” features such as separate level controls on the two channels. Uses CF cards.

You might be getting the impression that there is no one-size-fits-all solution. I suspect any of these “music” recorders will do the job if you’re planning on using just the built-in mics.

Next week we’ll look at some of the offerings at higher price levels and see what they have to offer for the money.

Other articles in this series: