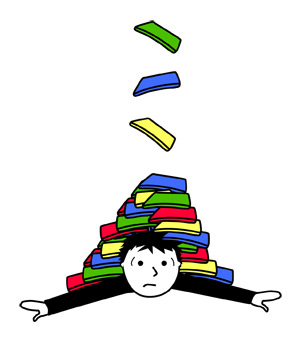 Every day, media is thrust into my life:

This is before I look at my Blackberry, open Instant Messenger, surf a single website, think about the book on my nightstand, or even fathom the idea of watching television or online video. Is it any wonder that I am stalling as long as possible before I get started on Twitter?

It is interesting to categorize media by the speed at which they pile up:

As we think about how publishing, media and journalism are changing, how do we factor in the speed at which media and information enters our lives?

As content creators look to “capture eyeballs,” how do you get those eyeballs to slow down? Has media consumption become a near thoughtless process of scanning, filtering and digesting?

This is all the more interesting as the concept of having a “conversation” with brands has taken hold. Many are asking readers to create content, comment on a story, “friend” their brand, or otherwise engage in some meaningful way. In a crowded marketplace, what does it mean?

Enter “super-users” and “grazers.” I would bet that many of us are becoming super-users on certain media, and grazers on others. Of course, a single person can be both, depending on media type.

Super-Users; a deep focus on a single media type:

Grazers; exposing themselves to media they are filtering:

It’s a fascinating distinction because it crosses the line of “content-creators” and “audience.” Super-users may create as much content as they consume. Grazers may be similar to traditional audiences, but even less engaged as they stream through massive amounts of media, constantly filtering.

To me, these concepts are not mutually exclusive, and can exist within a particular media type. For example, if I look at my day:

For a medium like magazines or RSS feeds, there are some that I am highly engaged with, like The New Yorker or perhaps a typical blog, like Publishing 2.0. I will take serious time with each of them. For many others, though, I scan and filter.

Likewise, for any medium that I can actively contribute content, I tend to be more engaged because that opportunity to join the conversation is always there.

As media companies work towards finding new relationships with their audience (along with business models), they may want to find ways to empower the super-users and nurture the grazers.