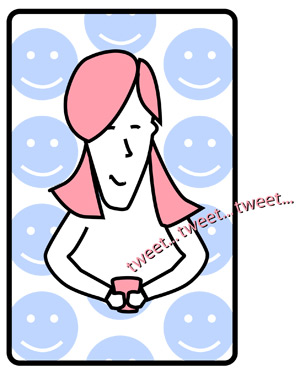 The micro-blogging service Twitter seems to be more than just another trendy tool. For many, it provides constant connection to the outside world, and quite literally, a community in your pocket.

In many ways, it is the ultimate reporting tool. You can send quick updates to trusted friends, individuals, or the web at large, using a simple device. The community reacts immediately, asking questions and sharing more information.

If you are unfamiliar with micro-blogging, Mark Glaser offers a concise description:

“Micro-blogging allows you to write brief text updates about your life on the go, and send them to friends and interested observers via text messaging, instant messaging, email or the web.”

Let’s take a look at a few of its uses.

“We are all part of the news network now. Twitter makes it a bigger faster network. But social media, time and time again is showing it’s value when dramatic and fast-moving news breaks.”

Dennis Howlett talks about the business utility of Twitter:

“When Hurricane Katrina struck, great weight was given to the speed with which the blogs swung into action. Twitter is proving far quicker at relaying reaction. This has huge implications for business.”

“World events can disrupt markets, impact buying decisions, affect entire economies. If the speed at which we are now being bombarded with news is literally in the moment, then enterprises will need to have appropriate process response mechanisms in place. I’m not convinced those exist.”

Amy Gahran adds that blogs and micro-blogs are the best way to stay on top of news in media-restricted countries, like Pakistan. It serves as a must-have utility:

“The key value to keep in mind about Twitter: Since it’s mobile-friendly for posting and receiving, and since it just works, it’s proven exceptionally useful during crises.”

These thoughts are mirrored by one Twitter’s post after the service was down for several hours:

“Whoa, that extended Twitdrawal underscored the glaring lack of community I feel in real-life.”

Of course, it’s not all serious. Lou Cabron has ideas for a celebrity-driven Twitter world:

“Envisioning the rise of Twitter consultants creating fake updates for Hollywood clientele. Imagining Paris Hilton junkies loving Twitter. Because of the illusion that they’re stalking her.”

It’s not hard to see how for a reporter, “covering” an event can become an immediate event within itself – with readers asking questions, adding information, and helping to lead the direction of the coverage. Robert Scoble has experimented with this when he attends exclusive press conferences: he will ask questions that people send him via Twitter.

Perhaps it’s not just about “conversations.” It is also about access – connections to people and events that would otherwise be unavailable. For a journalist – this is an amazing opportunity.