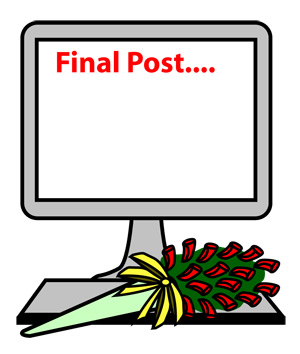 Professional journalists who cover important, yet dangerous, events, risk paying the ultimate price. In 2007, 124 ” media workers” were killed on the job, many in Iraq.

This week, a citizen journalist was killed in Iraq. Major Andrew Olmsted, who has been blogging about his experiences in the war for the Rocky Mountain News, died of “wounds suffered when insurgents attacked their unit using small arms fire during combat operations.”

From his first blog post for the Rocky Mountain News in May 2007:

“Which brings us back to this blog. I won’t pretend to be objective. It’s my job to help the Iraqis improve, and when I see success you’ll read about it here. But because I will be on the scene, I hope to bring a snapshot of what so many U.S. troops are doing back for the average American to read about and understand. My specific experiences will be unique to me but I hope that they will serve to bring a picture of the war that is sometimes hard to bring into focus for the people back home.”

He kept a personal blog prior to his blog on the Rocky Mountain News. Given the nature of his work, he prepared for such an event by creating a blog entry that would be posted in the event of his death. An excerpt:

“I’m dead. That sucks, at least for me and my family and friends. But all the tears in the world aren’t going to bring me back, so I would prefer that people remember the good things about me rather than mourning my loss. (If it turns out a specific number of tears will, in fact, bring me back to life, then by all means, break out the onions.) I had a pretty good life, as I noted above. Sure, all things being equal I would have preferred to have more time, but I have no business complaining with all the good fortune I’ve enjoyed in my life. So if you’re up for that, put on a little 80s music (preferably vintage 1980-1984), grab a Coke and have a drink with me. If you have it, throw ‘Freedom Isn’t Free’ from the Team America soundtrack in; if you can’t laugh at that song, I think you need to lighten up a little. I’m dead, but if you’re reading this, you’re not, so take a moment to enjoy that happy fact.”

He also praises the value of blogging:

“Believe it or not, one of the things I will miss most is not being able to blog any longer. The ability to put my thoughts on (virtual) paper and put them where people can read and respond to them has been marvelous, even if most people who have read my writings haven’t agreed with them. If there is any hope for the long term success of democracy, it will be if people agree to listen to and try to understand their political opponents rather than simply seeking to crush them. While the blogosphere has its share of partisans, there are some awfully smart people making excellent arguments out there as well, and I know I have learned quite a bit since I began blogging.”