After launching a new blog featuring a pair of enthusiastic outside contributors, what better way to promote it and them, than with a video and corresponding podcast? Maybe there’s no budget, but why should that be a problem?

But let’s start at the beginning. Last spring we recorded two podcasts with an expert on cyber security for industrial networks. (We only intended to do one, but there was enough material for two.) We posted the podcasts and received decent numbers. From that experience, it hit us that this guy might be an interesting blogger as this subject is heating up for our readership.

Over the summer our blogger was involved in starting up a new business with another similar expert, so he was a little too preoccupied to give it much attention. Nonetheless, we persisted and by fall he and his colleague were game to do the blog as a duo. The blog went live in November. While this topic has some overlap among Control Engineering beats, we decided to assign it to editor Renee Robbins for primary internal responsibility.

Shortly after they started, Matt and Steve (the bloggers) were coming to our RBI offices in Oak Brook to meet with Renee. Seeing an opportunity, I suggested we produce a short video “talk show” to interview our new personalities, so readers would have a better handle on who they are. All involved parties were open to the idea, so we shot this production in the lobby of our building where the furniture is arranged in a very handy setup for just such a purpose.

With some very simple lighting and individual lavalier mics, we got a pretty decent looking result as you can see for yourself. The shooting took about 45 minutes, and we were in and out of the room in little more than an hour. Jamie Pendley from pre-press watched over the sound levels using a small mixer and we fed one audio signal to the camera. Given that this was the first time we tried anything this ambitious, we learned some lessons that will make the next production even better. For example: 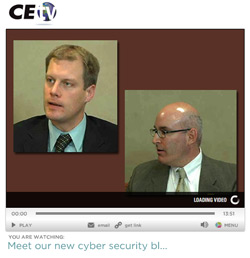 The overall presentation certainly seems a little stiff, but it’s still watchable. The participants are relaxed, and they don’t sound too rehearsed or like they’re reading. The two guys are pretty articulate, so we didn’t have to coach them. That made the process much easier. There was very little tape we weren’t able to use, so the whole thing was pretty efficient without much “can I do that again?”

The most serious problem was that one strand of Renee’s hair developed a mind of its own and wanted to grab the limelight. It was on the side away from the camera, but she still spotted it on the tape and admonished the bloggers for not telling her.

Since there are lots of people who can’t watch online videos, we took the edited soundtrack from the video and turned it into a podcast. It’s basically the same material with a new ending and audio copyright statement.

All in all, it was a good experience. We created a useful tool to promote the blog and there was no out-of-pocket cost. While a professional crew would have given us something more finished, the cost and time difference would have likely precluded us shooting it at all. I did the initial editing and Jamie cleaned it up for posting. For the intended purpose, the quality is more than adequate, and the participants were all pleased.

Maybe this won’t win an award at Sundance, but it could help stir up interest in the blog. That’s the real purpose after all.