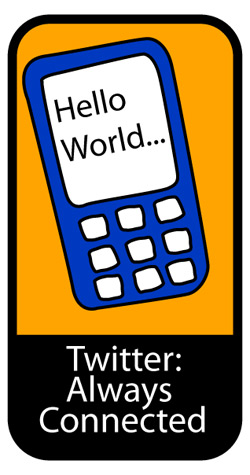 If there is one trend that journalists should pay attention to right now, I would say that it is the microblogging platform Twitter. Why? Because its snowball affect is coming quickly, and you have the chance to be a part of its evolution, instead of playing catch-up with other platforms like social media, video, blogging and podcasts. Twitter is a conversation, and you should be a part of it.

Steve Outing has this advice for journalists:

“News professionals can’t understand the transformation in media consumption if they don’t live it themselves.”

“In essence, twitter is an instant messenger that connects you to the rest of the world. It’s like getting the opportunity to speak to the universe, know that the universe is listening, and even sometimes have the universe speak back to you.”

“Because ideas and news spread faster on MicroBlogging networks, journalists can move faster, keep their finger on the pulse of their industry and rapidly contact individuals for perspectives.”

J.D. Lasica suggests how a journalist can engage their community during the reporting process:

“A beat reporter could enlist a dozen or two dozen passionate, driven readers to serve as a kind of Twitter posse. Whenever she was about to tackle a big story or difficult interview, the reporter could begin a mobile dialogue with her posse members, who could pose questions”

As Mark Glaser points out, it is becoming a world where everyone is reporting, anywhere, anytime.

Darren Rowse lists the nine ways that he is using Twitter to engage with his audience online:

And Jeremiah shares tips on how to attract a large Twitter following:

There is a “bigness” to the idea of the idea of listening to and speaking to a community anywhere, anytime, via your mobile phone. Yet, there is an immediacy and comfort to it as well. You are never alone.

Other new services have people experimenting with social networks within your physical proximity.

The common thread: the growing importance of the phone for non-voice communications and workflows.

John Dickerson, via Twitter, has a concise view of Twitter’s place in journalism:

“Recovering from blow by journalism prof. who fishslapped me for using Twitter. Sending him a feather quill pen and Windex for his monocle.”

Here is a New York Times profile on John’s Twittering from the campaign trail.