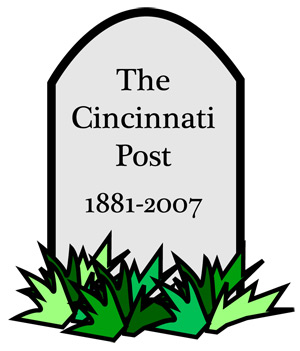 I think its only fitting to start the new year with fewer potifications on what great new technologies we will see, and give a sober look at what journalism and publishers are facing.

After 126 years, The Cincinati Post has created their final edition. BusinessWeek writes:

“Originally called The Penny Paper when it was started in 1881, the paper was renamed The Penny Post by E.W. Scripps, who assumed control in 1883. The newspaper became The Cincinnati Post in 1890, when its Kentucky Post edition began.”

“The Post newsroom was down to about 50 people at the end, and its daily circulation was less than a tenth of the 270,000-plus it enjoyed in 1960, before changing lifestyles, the expansion of television news, and later, the rise of multimedia news and advertising sources, sapped readership.”

This is not to say that the circumstances that lead to the demise of The Cincinnati Post are common or will lead to a domino effect. But lessons can be learned:

As is common with the closing of a print publication, the favorable economics of web publishing are underscored:

“The Post reported that the Scripps company will keep a Kentucky presence with kypost.com… One Post staffer, Kerry Duke, will stay on as the site’s managing editor. The site will also use a full-time reporter, freelance journalists and contributions from “citizen journalists” in addition to WCPO and news services.”