I constantly read about how newspapers, magazines, media companies and journalists are evolving to meet the changing needs of their audience by leveraging new tools on the web. Oftentimes, these changes happen with reduced resources, while learning new skills.

There are more and more success stories that empower individual journalists, and move brands in exciting new directions. In that spirit, I want to share three moments in music where the artist connected with their audience by stepping across a boundary.

U2 was supposed to play a three-song set, and, at the time, they were still an up-and-coming band, whose album sales had stagnated.

Midway through their second song, Bono broke script, and disappeared. While the confused band kept the song going, Bono jumped down into the crowd to connect with the massive audience. In a single motion you see him drop 10 feet – an action that risked their entire career.

Once he appeared back onstage, he didn’t return to any U2 songs, but sang lyrics from the Rolling Stones and Lou Reed. As time ran out, U2 had missed their chance to play their last song. After the show, the band wouldn’t speak to him, and he was certain he had ended his career in music.

As it turns out, his reaching out to the audience was widely hailed as a highlight of the event, and sent all of the bands albums back into the charts. Bono also learned, years later, that Lou Reed was deeply moved at being included. 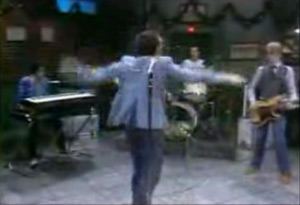 In 1977, Elvis Costello and the Attractions performed on Saturday Night Live. The show’s producer requested they not play their song “Radio Radio,” since the song protested the current state of the media.

Elvis began playing another song, and then quickly halted his band. He explained that there isn’t any reason they should be playing that song, and then broke into “Radio Radio.” That move got the group banned from SNL, but further exposed the issue of control in the media. 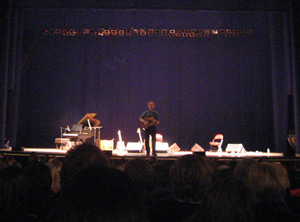 My wife and I went to see The Swell Season perform at the Beacon Theater in November. This group is made up of Markéta Irglová and Glen Hansard of The Frames, and they starred in and provided the soundtrack for the movie Once.

To start off the show, Glen walked out onto the historic stage, and instead of stepping behind the microphone, he steps in front of it, at the edge of the stage. Without a microphone or amplification, he sang the first song of the night. The audience hushed immediately, and it was a powerful move of connecting directly with those in attendance.

That simple action told the 2,500 people who were watching that this evening won’t be a one way “performance.” And sure enough, Glen chatted with the crowd between each song, took requests, and made clear that he was as honored to be playing The Beacon with us, as we were to see him.

(the link goes to a performance of theirs from earlier in the year. I didn’t take video of the Nov. performance.)

Should each artist have taken the action they did? Does it really mean anything? Who knows. But I love music, I love journalists, I love the opportunity that new media provides us, and I love watching folks try new things.