From April-June, I partnered with Broadcasting &Cable to see if we could increase the performance of one of their blogs. I’ll start at the end, here are the results: 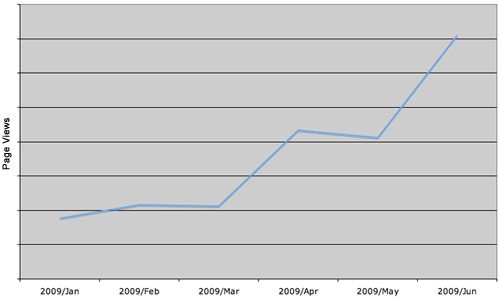 A few things this chart tells us:

The blog we focused on was Fates & Fortunes, authored by Paige Albiniak, contributing editor for Broadcasting & Cable. While Fates has been around since December 2007, Paige only began blogging for it this year. She wrote the Beyond the Box blog for years, and has been a consistent contributor to B&C in many other ways.

In March, I spoke with the B&C team – Ben Grossman, Melissa Grego, Joel Topcik and Stephanie Robbins about their blog strategy and ways that we can support a blogger such as Paige. We ended up with a three month plan to partner with Paige and see what could be accomplished with a concerted effort. The lessons below describe our approach from both a strategic and tactical level.

In the past three months this is what I have learned:

A HUGE thanks to Paige, the B&C team, and colleagues in RB Interactive and RBI who are responsible for the growth of this blog & and tying it to larger business strategies.

For more ways to improve your blog, check out these posts: