Sooner or later, you’ll probably have to do a video or audio project on the floor of a trade show or some other noisy environment. There are ways to do that and still get usable sound quality.

Documentary videographers generally suggest that the soundtrack with video is as important, or even more important than the picture. When doing interviews or demonstrations, what the subject says is usually the most critical. The way to ensure understandable discussion is to get the microphone as close as possible to the subject. This way, even if you’re in a noisy location, the speech will be stronger than the background racket.

When doing a podcast, that’s easy. When shooting video, it can become more complicated. Here’s why:

Most video cameras depend on a built-in mic. Since you have to be at a reasonable distance from the subject for shooting, the mic is also that far away. The sound of the subject blends into the background noise because the mic isn’t very selective.

If you have even a slightly sophisticated camera, there is probably an external mic jack. You can plug an external mic into the camera and you’re troubles are over. Using a simple adapter (see photo) you can use professional designs like the RE50 and your problem is solved. Get right up to the subject while you’re shooting.

However, the growing popularity of Flip video and similar pocket cameras means that more editors are carrying these around. Most do not have an external mic socket. Now what?

If you have a digital recorder, you can record the sound separately on the recorder while shooting the video. This is a common approach in film production, and is known as “double-system sound.” Since serious movie cameras do not record the sound onto the film, it’s done separately and then matched during editing. The slate or clap stick that you see the assistant snap at the beginning of a scene is to provide an audible and visual cue for the editor to match so the two are properly synchronized. 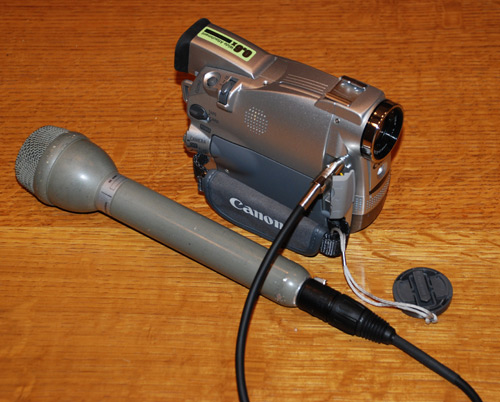 Using an adapter available from B&H or a store like Guitar Center, you can connect a professional mic to a camera with a mini-stereo input. The right kind of adapter will put the signal on both channels of the stereo soundtrack. You can use the same adapter to connect to most small digital recorders. If the adapter is too short (like this one) use a standard mic cable of any length to extend it. The mic in this case is an ElectroVoice RE-50 which is one of the most versatile designs you can own.

You can do the same thing. Record your audio as if it were a podcast while your camera person is shooting the video. (If you want to be really sophisticated, clap your hands on camera once as you begin to provide the same signal to the editor. That will be cut off of the final product.) The editor can take the soundtrack and match it with the picture. The recorder’s built-in mic will work, but it looks more impressive to hold a professional looking mic up the subject than your whole recorder. It’s simply a matter of image.

This short video clip below (1:20) was shot in the noisiest location I could think of, a college dining hall. My longsuffering daughter allowed me to join her dinner gathering and one of her friends shot with a little Canon ZR 70 (see photo). This is a home-movie type of camcorder, several years old, although it does have an external mic jack. I could have plugged in the external mic, but I wanted to prove the point.

We were sitting around a table that was probably 3’ square, so I wasn’t all that far from the camera. In the first part, we used the on-camera mic. The second part was done using the double-system approach. I matched the soundtrack in Final Cut and got this result.

One more thought on recording at trade shows. The problem of chaos can be even more difficult to overcome than noise. With all that’s happening, it’s hard to keep someone’s attention. There are so many things to look at, your subject and your thoughts will be hard to keep focused. Don’t expect a long and involved dialog. Keep it short and simple or go someplace with fewer distractions.