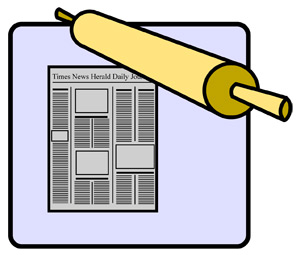 Steve Outing reached out to his network of colleagues in the news industry to find out what their biggest problem was:

“Everyone’s got work to do to put out the “daily miracle,” but in an era when the old industry model is in decline, we can no longer afford to have a workforce where the majority are solely doing the work of “putting out the paper.”

To evolve the newsroom culture in order to meet the changing needs of their business and audience, Steve suggests the following:

Howard Owens takes this a step further, and lays out a curriculum of skills that a non-wired journalist should strive to complete:

Scott Karp offers a phenomenal recap of thoughts from others in the news industry on how journalism and the news media needs to change.

When we talk about changing journalism, there tends to be fear that we will lose its inherent purpose. Many changes in the industry tend to be small steps that are well intentioned, but make no sizeable movement towards ensuring they are meeting the changing needs of their audience or business.

Perhaps the biggest example on why innovation is required to save journalism is the Wall Street Journal’s changing hands last year. The family that owned the business did not want to sell, but was given an offer that they – and their shareholders – couldn’t refuse.

Because the family did not ensure the business side was on stable footing… they could not simply protect their journalists by not selling. The business side is essential to the journalism side, and innovation is needed to ensure both have a healthy future.