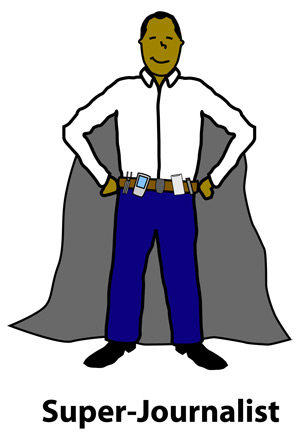 Journalists are finding success with pocket-sized tools that allow them to report on stories from almost anywhere in the world.

Reuters is having their reporters experiment with a “mobile journalism toolkit,” which allows reporting in text, audio, video and photos:

For truly live mobile reporting, Robert Scoble has embraced the idea of streaming live video from his mobile phone via a service called Qik. You can see the videos he has shot here. He comments:

“My world has just changed. Thanks Qik!… The quality isn’t the best, but it’s watchable and that’s all we really need considering that video is coming to you over a cell phone connection.”

Howard Owens feels that mobile reporting should free journalists to spend more time with the people in their beat, as opposed to commuting or in an office. His advice for someone covering a particular town or region:

“The classic image of a MoJo is a reporter sitting in his car, filing a story. Certainly, you must spend time doing that, but the less time you spend actually driving that car, the better. You need to be out and about, on foot, with people. Your job isn’t to find scandal or hard-hitting news. Your job is to unlock the life of your town in a way that print journalism hasn’t done consistently for generations. It’s all about people.”

Howard’s point is a good one. While there is so much focus on the tools of journalism, the real change is how they allow journalists to connect with their sources and help their communities.