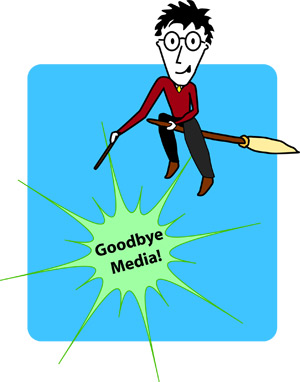 Time magazine profiles J.K. Rowling, and illustrates another way that the “media middleman” has been removed, allowing the author to connect directly with her fans:

“She doesn’t actually need to talk to Barbara Walters (who named her the most fascinating person of the year), because her fans know where to find her: her website, which includes news, a diary, a rubbish bin for addressing the more idiotic rumors, and answers to both the frequently and the never asked questions.”

This, of course, does not mean “the death of media,” but it certainly indicates the shrinking power and need for traditional media channels. In the example above, there is value in J.K. speaking to Time or Barbara Walters for marketing value. But for someone like J.K. who may not be looking to expand her audience, and who closely guards her Harry Potter secrets – there are now many other options to share information and connect with her audience.

This is really a microcosm of the larger social networking trend. Someone like blogger Robert Scoble is asking for ways to remove himself as a barrier for having his friends link up with each other:

“I’ve brought together a unique group of friends. I’d love it if you could get to know them… But I can’t. The only way I can help you get to know them is to manually share their stuff out… I guess I’m a gatekeeper.”

Even the Queen of England is leveraging new media to connect directly with her community. Am I foolish enough to believe that she will be responding to comments herself, no. However, there is nothing stopping her or other members of the royal family to begin speaking with anyone via social networking tools.

As the world embraces these online tools, the media themselves are struggling to redefine their role, while salvaging their power and business model.

Darren Rowse shares 5 reasons why traditional media is no longer serving the needs of their audience: