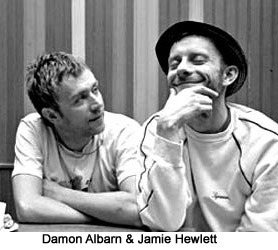 This week, I’ve been obsessed with the band Gorillaz, and considering what the publishing industry can learn from them. Gorillaz started out in 1998 as a concept, founded by the singer/musician Damon Albarn, and artist/illustrator Jamie Hewlett. Okay, I don’t want to bore you with background, let’s dig into why this group is so fascinating to me, and why they offer compelling lessons for those in publishing:

Remix Media
What Gorillaz did: Gorillaz started out as a cartoon band… a concept that Damon would create the music, and Jamie would create the animations that would serve as the band itself. Art and music were being integrated in a compelling way by two masters in their fields. In an age when the music industry is floundering, Gorillaz created a compelling new form, filled with over the top visuals and incredible music. You didn’t know where the line between reality and cartoon was, Damon and Jamie created an entire universe for their project, a remix of everything you can do with media.

Gorillaz isn’t mixing these forms as a marketing tool – where a band tries to create a new revenue stream by creating a cartoon or movie or viral video. The art and music are integrated completely, so much so that early live performances had the actual musicians hidden behind a screen, with projected cartoon characters miming the music.

Lesson for publishers: Online media is not a tactic, a separate channel from your offline efforts. You need to fully integrate your processes and products to create something entirely new. If you publish a print magazine, don’t offload web operations to a separate team, editors need to be 100% vested in their online products.

Respect the Past While Creating the Future
What Gorillaz did: To create the music for Gorillaz, Damon put himself into the role of ringleader, recruiting a variety of guest performers for each individual song. He got some big names, but didn’t go for the obvious choices. For their latest album, he recruited Bobby Womack for vocals on their first single. Bobby hadn’t been on stage or in a studio in 15 years, and had never heard of Gorillaz. This wasn’t a band choosing to work with Elton John because it would bring a built-in audience, Damon approached people who were insanely talented and underappreciated. As Damon said of Bobby’s contribution to their album: "The world with Bobby Womack is a richer place."

Likewise, Damon recruited many modern day performers. The result is a bizarre mixture of generation and genre, something unique in today’s musical landscape.

Lesson for publishers: Too many in publishing are arguing between print vs web, or bloggers vs journalists. And really, the answer is: take the best from both worlds. Too many are putting their journalists in one bucket and their bloggers in another, trying to keep both sides happy and content. Break down those walls – create a new form of media, a new structure for your company, a new offering for your customers that integrates both sides in a compelling and useful manner. Stop looking over your shoulder, look to the horizon.

Control & Collaborate
What Gorillaz did: Damon is known as a singer, but is an incredible musician as well, mastering many instruments. His skillset requires that everyone else in the room perform at the highest possible level. And yet, when you listen to their albums or watch a live performance, it is filled with funny, off-kilter moments. This is clearly something that took a ton of effort to create and control, but where the reigns are not held so tightly that the many performers can’t express themselves.

Having trust and letting go is a core part of collaboration. As Bobby Womack said of Damon & Jamie: "There ain’t no ego. These guys are cool. They respect me. They make me think, "I can do that."

Lesson for publishers: There is too much conversation going on about definitions and rules in media. What is a ‘journalist,’ what are the social media guidelines for a staff. Likewise, online product development can consist of a huge requirements process and months of development, at which point, everyone is locked into what they are building.

It takes a real leader, and an amazing manager to steer a big ship. And yet, it takes an even BETTER leader and manager to allow the crew and passengers to feel open and free, to empower them, not control them.

When moving your business online, beware of too much control. Your best people and best ideas will be lost under a litany of rules and regulations.

Blend Style and Substance
What Gorillaz did: Some of Gorillaz music seems flippant. Damon is an aficionado of vintage electronic instruments, and utilizes sounds that are reminiscent of old jingles. But when you look behind the curtain, you realize his skill and appreciation goes deeper than the tiny 30 year old keyboard he is playing. He is pushing the instrument and the music in new directions.

Lesson for publishers: Have some confidence. Not everything needs to be buttoned up and corporate. Yes, the core value you deliver must be super high quality, but don’t be afraid to let your colors show.

Unite Instead of Divide
What Gorillaz did: The music of Gorillaz is an amalgamation of many different musical styles from a variety of cultures and eras. Hip hop plays primary role in some songs, and is absent from others. The inclusion that is pervasive on their albums unites music, unites cultural differences, instead of segmenting and dividing them. Does it make Gorillaz hard to categorize? Sure. Does it make them one of the most innovative bands in the world? Absolutely.

Lesson for publishers: Break down barriers. Be aware of how tradition is limiting, and how you can open new doors that lead to new opportunities. This is no longer ‘us vs them,’ this is an opportunity to extend the value of what you provide. Think journalists can’t Tweet? Think again. Think print is the only value you can deliver? Think again. Think that your competitors are the enemy? Think again. Unite, don’t divide.

Be Easy to Taste and Hard to Master
What Gorillaz did: Many casual fans just nod along to a catchy Gorillaz tune, but if you want to go deeper, each album is its own concept, there are tons of bonuses on the band’s website, and you can dig into the many collaborators on each song. This creates an inclusive ecosystem where people can casually sample Gorillaz wares, and where others can become die-hard fans.

Lesson for publishers: Don’t focus on a single audience segment. Even in niche markets, you need to make it super-easy for your audience to find value in your brand. From there, you can offer deeper ways to interact, to go from casual fan, to collaborator.

Embrace the Fragmented Media Culture
What Gorillaz did: Damon on how Gorillaz is dealing with our changing media culture: "We have to start taking ownership of records again, instead of constant fragmentation of everything. There’s no meditation on one thing. So maybe you’ve got to make something so varied that it feels like your going through all that flipping mentality, but your actually meditating on one thing."

Lesson for publishers: Don’t fight it, leverage it. You can no longer control the media landscape, the behavior of your audience or partners as you once did. Instead of creating a situation where you can again, embrace the openness of the change in media. How can you remix how an editorial team delivers value?

More on Gorillaz: The quotes above were pulled from various Gorillaz interviews: here, here, here, and here.