Showing up at a trade show, conference, or other event with a recorder or a video camera but no plans on what you’re going to do with them can become a frustrating experience. Thinking ahead can solve this, or at least make it easier.

Maybe you’ve been there yourself: You go to an event with good intentions and the desire to bring back some kind of multi-media project. All those people are there, you must be able to do SOMETHING with that, right? So you find yourself in the midst of all that activity and you don’t have a clue what you’re going to do. People are busy, and they aren’t going to fall at your feet to talk about their lives or stand there in the good light waiting for you to start rolling videotape. 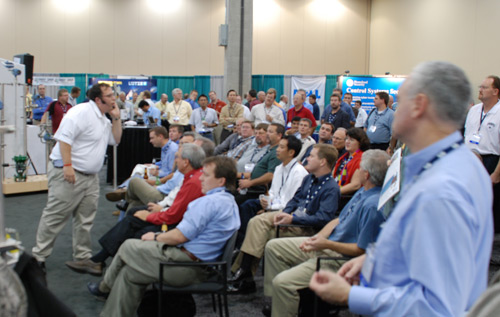 You’re at an event, equipment at hand. Now, what do you do with it? If you don’t think ahead, it may never come out of the bag and you’ll go home empty-handed and frustrated.

If you’re at a trade show, you can always find people who will tell you about their products. If traffic is slow, they’ll talk to you and do demos for hours. You can tape or video to your heart’s content. If that’s what you want, you’ve got it made.

Don’t get me wrong, sometimes this is exactly what you want. Audio or video product explanations or demos are an appropriate use of the media, and companies may actually pay you for it. If you are planning on doing some kind of online product release for that company anyway, such demos can be embedded as sound bites or short videos to add pizzazz to a mundane product story. Here are examples of embedded audio and video.

At many events, the sponsoring organization will have opinions on what you should be doing and NOT doing, particularly with a video camera. Much depends on the nature of the event. People working a booth at a trade show are generally marketing and sales types, so they’re not shy and are used to performing a spiel on demand. Often the official regulations will discourage video and even photography, but enforcement may be minimal or non-existent. It helps if you aren’t too obvious about waving your equipment around, and don’t start shooting the nearby exhibitors without asking permission.

Conferences that attract non-sales, end-user people can be different and much more tightly controlled. Hosts don’t want the attendees pestered, especially if they’re paying to be there. Attendees like to have hallway discussions without fear that they are being filmed or that the walls have ears. There are also potential issues that your subject’s company may not want him or her on camera or even on tape. I’ve been at user groups where a PR person accompanied me whenever I was shooting or even had the camera out. Maybe that sounds a little like North Korea, but this is still largely uncharted territory for most companies, and they want to keep things under control.

But if you aren’t happy with product demos, you have to figure something else out. That’s a challenge, and one that I struggle with. For example, last spring I was at a major trade show for an industry that’s part of my coverage area. I was armed with my recorder and determined to bring back some kind of audio project that provided an overview of the whole event. Having a few product demos were fine, but I also wanted something more “journalistic.” Unfortunately, I had made no specific appointments with key people, nor were many of my usual contacts on site. Yes, it was very poor planning.

I found people to talk to at some of my key companies, but came back with a hodge-podge of recordings on assorted topics. As I started thinking about how to use these, I had a couple of choices:

I went for B and tried to fabricate something that represented the larger industry. But it didn’t work because the discussions didn’t have a strong enough connection to a common theme. After doing the editing, I simply abandoned the project. Sometimes that’s the only thing you can do. The lesson I took away was to plan ahead:

If you’re creative and don’t mind some time spent editing, you can put these remarks together with some of your own commentary into an industry overview from the event.

None of this is particularly creative journalism. It follows standard practices. But you may find that when the tape or video camera is rolling, you have to adapt the way you think about questions. It’s the difference between you being an invisible and silent observer to being a more conspicuous part of the process.