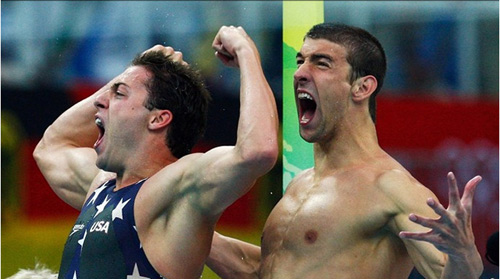 Why do we watch the Olympics? What can someone in media and publishing learn from this event to help them succeed in their goals – in particular, transitioning an editorial and business model from print to web? My theory:…

We watch the Olympics to experience GREATNESS.

Media and publishing are not going through a "transition." In case you haven’t noticed – they are in turmoil. Newspaper staff layoffs, companies being bought and sold, ad revenue disappearing, audience behavior changing, new competition from all sides. Just think about what Craigslist and Monster and the like have done to newspapers’ classified business. Or the state of the music industry. And all this is just a start.

So let’s not kid ourselves about easing into a transition in media. There is no easing going on, and if there is, perhaps the easing needs to do so a little bit faster. You know, the way you "ease" onto a Slip ‘n Slide. And I am not just talking about media content and audience behavior, I mean the business side too.

So with that in mind, let’s look at these 16 days of glory. Olympians are reaching for perfection. They are pushing past boundaries that are impossible to push past. How do they do it?

Let’s take the Olympic swimmers for example. Here are a few things that they do to rethink what is possible:

They are focused on shaving fractions of a second off their time. EVERYTHING – every hair on their body – counts towards achieving this goal.

This is what separates the GOOD from the GREAT. And this is what we need to be talking about.

These swimmers don’t just say “I am really good, I can prove it.” In fact, a key element to going from GOOD to GREAT has to do with a single item:

Or perhaps this is better defined as pride. While both can be ludicrously valuable, they can also prevent someone from adapting to changing market conditions. Removing pride and ego allows someone to stop hiding behind their skills and accomplishments, in order to push themselves into the unknown – to push past boundaries that no one else can.

What do swimmers do after a competition? There may be some celebrating, but their focus is not solely on congratulating themselves:

What about another sport. A non-Olympic sport. What about Tiger Woods. Does he say to himself: “I am the greatest, I just need to keep doing what I am doing?” Nope.

Earlier in the decade, he decided to do the unthinkable: COMPELTELY CHANGE HIS SWING. It should be noted, that he was at the top of his game at the time. Tiger defends his decision:

"I felt like I could get better. People thought it was asinine for me to change my swing after I won the Masters by 12 shots. … Why would you want to change that? Well, I thought I could become better."

And he was right. He is still at the top of his game. His 2008 accomplishments are profound, especially considering he is out for the rest of the year recuperating from surgery.

Since not everyone loves sports analogies, let’s take another example… how about Jay Leno? Just another highly paid stiff who had some talent, and got lucky? Nope.

Last December, Steve Rubel took a look at what we can all learn from Jay Leno, and came up with these lessons:

To me, this sounds like the same ethics that motivates Olympians. Fortune magazine did a profile on Leno (which inspired Rubel’s post) and shared some of his processes, and what differentiates him from others in his business. Well worth the read.

All of these attributes require Jay to look past his own success, his own talent – past his own pride – in order to constantly challenge himself. He puts himself back in tiny comedy clubs to try out new material, instead of relying on the dozens of writers who are paid to write jokes for him, and stay in the comfort of an NBC studio.

So why do we watch the Olympics? To remember that all those boundaries are actually imaginary. That they are simply a frame of mind. Either you will them into existance, or you will them away.