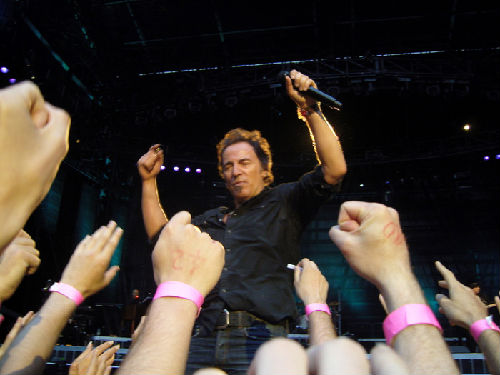 On Monday, I took my brother to see Bruce Springsteen as a way to celebrate his birthday. But truth be told, I had an ulterior motive:

I wanted to experience GREATNESS.

I am not a huge Bruce fan, I generally like his music as much as the next person, and being from Jersey, take a certain amount of pride in his success. But his performances are otherworldly.

When I experience greatness, I always try to find lessons that I can take back an instill in my everyday life. In the case of creating compelling online products, this is what Bruce has taught me:

During the show, I was transfixed by people’s hands reaching out to touch him, as he worked the front of the crowd, trying to touch as many as possible. Why do people do this? What does it mean?

People want to experience GREATNESS. They want to be inspired to by those who forget about the barriers, forget about the rules, and deliver something so extraordinary, that simply being near it makes their lives more complete.

I spend a lot of time reading and learning about the state of publishing: B2B, consumer, newspapers, magazines, books, and media in general- from both an editorial and business perspective.

What has Bruce taught me about how to succeed in publishing in a time of transition? Simple:

There is nothing more important than understanding the needs of your industry, and serving them with greater passion and invention than anyone else. It is that singular focus that matters.

Simplify. Connect. Overdeliver. That is what Bruce has taught me.