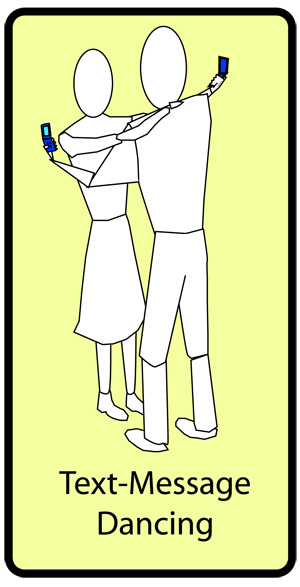 A recent trip to Panera became a lesson in the sociology of teenagers for Scott Karp, as he observed those at the table next to him:

“What’s also notable is that every one of them has a cellphone in hand. They are constantly showing each other photos and text messages on their phones. The phones are so deeply integrated into their conversation and interaction, they are like extensions of their identities.”

“I were a marketer looking to reach teens, I would be all over the cellphone.”

“…my son Josh will play games on everything from his phone to his computer to my computer to his xbox. It doesn’t matter what game it is and what device its on. He likes TV, movies, and games and seems to move effortlessly between all these forms of entertainment as if they were all the same.”

I am friends with quite a few teachers, who explain how much text messaging and cell phones play a pivotal role in the lives of their students. Social networks seem to come and go, but the cell phone is forever.

As we look at the future of media and journalism, I can’t help but think about the behavior of teenagers. It would seem that no event in their lives is unreported or unshared. Even when sharing a moment with a group of friends, they are compelled to text or call those who aren’t present.

Unlike previous generations, they are not just consumers of media, but creators.

Digital artifacts are created with amazing speed. No matter how minor the event – a string of digital conversations is recorder – photos are posted – and videos are taken. They are all shared either in the moment, or later on different social networks and media sites like YouTube or Flickr.

We are becoming a culture where everyone is reporting.

Perhaps it is only of minor moments in their lives, it may be idealised or parody, but the concept of sharing and connecting every moment with everyone you know is inherent in the lives of teenagers.

As I look at the state of publishing, journalism, media and the like, I can’t help but feel there is a bright future.