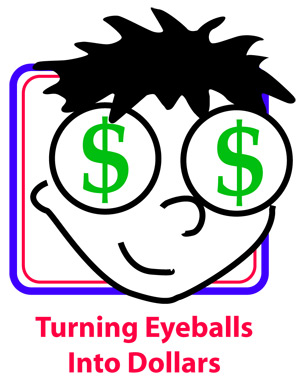 Magazines and newspapers are looking to attract readers online, and find ways to monetize their attention. However, there are a variety of obstacles in the way, not least of which is the elephant in the room:

But Rex Hammock is a bit tired of hearing people say that magazine brands will never be able to compete online against sites like Google in terms of generating page views. He offers an alternative:

“Is traffic the the only — or the universally definitive — competitive metric of the web? Will traffic always be the metric used by advertisers to determine where they should invest their marketing dollars?”

“In the end, raw traffic will be the competitive metric of search-oriented advertising — a massive and powerful new form of advertising that leads directly to decisions and transactions. However, another form of online advertising that’s focused on brand-building and lifestyle-association will gravitate to those places on the web where people engage in their passions and loves.”

“And that’s an arena where magazine companies should be able to compete rather forcefully if the people who run them would get over believing in the myth that such a competition is over.”

“With Web companies now beginning to dominate the market for local ads online, newspaper publishers are scrambling to change the way they sell ads, hiring sales teams that specialize in the digital market and creating new editorial packages to sell.”

“Many newspapers also hurt themselves by simply plopping their papers online instead of creating new Web sites that offered advertisers something they couldn’t get in print. Meanwhile, Web companies such as Google and Local.com are growing rapidly because they have made it cheap and easy for local companies to take out ads.”

“Newspapers are tied too closely to defending their print products and have not seen the Internet as an innovative and competitive tool to go out and compete,” says Gordon Borrell, chief executive of Borrell Associates”

“[they] handed what should be their local market over to Google and other online companies that set up efficient means to sell a lot of little ads, which equals big revenue.”

And while still strong, online ad spending is not growing at the same rate it used to:

“Online advertising for the first nine months of 2007 was up 15.9 percent, according to Nielsen Monitor-Plus’s latest figures. While still the leading gainer compared to other media, online’s growth rate is much slower than 2006 when internet ad spend grew 49.2 percent through Q3… As every measurement of internet advertising has shown this year, growth has been steadily declining.”

Perhaps this is because advertisers themselves are becoming media brands:

“Today, thanks to the web, every brand can become a media company if they put resources behind it. This means that the media and advertisers are increasingly battling each other for your constricting field of attention. In 2008 and beyond this will threaten to undermine the entire notion of ad-supported content and perhaps change the economics of both industries dramatically.”

Hugo E. Martin shares survey results of where B2B marketers will be increasing their online spending:

Now, let’s take a closer look at exactly who clicks on all those banner ads:

“Ninety-nine percent of Web users do not click on ads on a monthly basis. Of the 1% that do, most only click once a month. Less than two tenths of one percent click more often. That tiny percentage makes up the vast majority of banner ad clicks… these are the same people that tend to open direct mail and love to talk to telemarketers.”

“If these folks are not your target, then you should be ignoring the click-rate and looking deeper, to what audience your impressions are being delivered, and what audiences are converting (there is a large body of evidence that shows that click-rates and conversion rates rarely correlate with each other).”

“The mass media is no longer only for the powerful, and that’s a huge change for the entire newspaper and news industry.”