This is a story about what is standing between individual journalists who blog and work on the web, and crushing lawsuits from large companies… 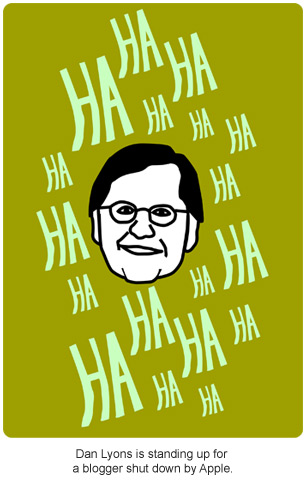 Last week, a blogger gave up his right to report on a certain company. The man is Nick Ciarelli, a student who has written the influential Think Secret blog, which speculates on Apple’s future products. After years of legal wranglings, he has come to an “agreement” with Apple, and they will kindly, not sue him.

As more individual bloggers become media brands, and traditional journalists jump ship to smaller web companies, will stories like this become more pervasive? Without a large corporate backing a journalist, are they now targets for lawsuits and scare tactics from large corporates, and perhaps others?

So far, the most brilliant response to this has been by Forbes senior editor Dan Lyons, who runs an Apple parody website called Fake Steve Jobs. In the past day, he has posted two entries to his blog:

His entries are, of course, a fake, but a wonderful holiday gift to bloggers everywhere. Excerpts:

“…do you not understand why it’s wrong to offer someone money to stop writing about your company? Sure, Nick Ciarelli is just some college kid with a blog, and I’m just some dope writing jokes, but where does this end?”

“Think about your brand. What does Apple stand for? It’s about freedom. It’s about independence. It’s about people who think different. The crazy ones. The misfits. The rebels. The troublemakers. Maybe I’m an idiot but I actually believed that stuff. I guess I’m naive. I really wanted to believe that you meant that stuff, and maybe by wanting to believe in that I allowed myself to get duped.”

This parody may not be austere, but it is a brilliant attempt to save online journalism. Being a journalist is not an easy job by any measure. How much more difficult does it become when the traditional media structure that has protected journalists goes away?

What happens when successful journalists only write for the web, perhaps for their own company. When they are faced with spending thousands of dollars defending themselves, or risk crossing ethical lines with their profession? What happens when feeding their family is at risk.

This is a fascinating episode, with questions that won’t be answered easily or quickly. One thing is for certain: Apple’s brand promise is seeing a quick demise.